P.S. – For those missing/wanting some f/m sexy goodness from me, it’s coming. – X

She woke me from a dead sleep when she laughed so hard at something on TV the bed shook. 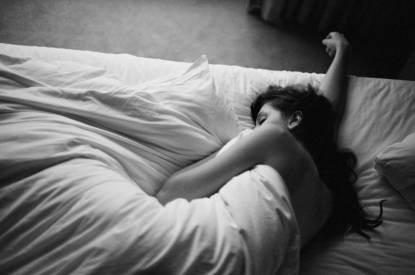 I opened an eye and she was licking cream off a spoon. Sleep flew.

“Carajo! Me has espantado el angel de la guarda!” I said, but I couldn’t stop staring at her. She didn’t quite understand Spanish, but clearly heard the mirth in my voice.

I stared at the shadow of her nipples underneath her worn t-shirt.

“Take if off.” I surprised myself with the strident clarity of my voice. There was not the least bit of sleepiness left.

She complied without a peep of protest. Her face glowed as she dripped the melting ice cream over her nipple. It hardened right in front of my eyes before I licked it off slowly, never taking my eyes from hers.

The studio audience oohed as if on cue.

“This is so much better than late night tv,” she said breathlessly.

Soon, my chin was sticky and her breasts shone with sugar and saliva. Her nipples were nearly crimson with cold and my lovebites. I caressed slow circles on her clit, barely touching. I wanted her drip undisturbed down the crack of her pussy until I was ready to lick it up. Her skin was russety with the day’s exertions – she hadn’t showered yet – and I could smell her musk already.

I pulled her panties off with  finger and she was silvery in the semidark with wetness. Her hand trembled as she drizzled ice cream down down down- she spread her legs slowly – arched her back –

I grabbed the spoon and stuck it in my mouth before cream dripped on her mound.

The spoon slid out slow. “I prefer umami.” I moved between her legs and pushed her thighs apart. Melted ice cream dripped from her belly to the sheets.

“Zora had said something about seeing a spray at a sex store that makes a woman’s pussy taste like vanilla, oranges, crazy shit like that…”

I nuzzled the skin of her thighs and sighed. “Blasphemy,” I said into the seam of her being. “Absolute and utter bullshit.” My nipples hardened as her scent hit me, full force. I had studied and cherished her scents so closely I knew she was close to her period…there was an extra animalic note that signaled she’d come copiously – and more than once – if I applied myself.

“You’re getting that look.” Again, she smiled at me and suffused me with her glow.

I licked lightly at her. “You don’t need any additives. How could I defile something so…mine?”

“Mine…” she said as I massaged her clit between two fingers. She was so wet they slid like oil.

“Yes, mine. I don’t believe you taste this maddeningly, addictively amazing for anyone else but me.” I sucked my fingers clean like it was the last lick of the brownie bowl, then double dipped.

She let out a giggle that turned into a moan. Her breath was short. “Oh really? Maybe I’m just naturally delicious.” Two fingers disappeared inside her as I moved up her body. I kissed her hard. Her lips were dry from panting. Although she trembled, I could still feel her lips curl upward in her way.

“Wanna know how I know?”

She cocked an eyebrow.

“It’s your smile.” My fingers curled now, as fingers will, and her smile faded.

“Wha-?” She exhaled into my face in the same rhythm as the thrusts of my hand. A familiar haze started to cloud the edges of my vision. I imagined millions of molecules of dopamine being released in my bloodstream. If I could mainline her, I’d be a lost cause.

Just as I was about to bite down, she twisted out of my arms and stood up by the bed. I blinked owlishly at her. My limbs felt heavy, but I didn’t know whether it was desire or exhaustion.

She put her hands on her hips, a strange sight when someone’s naked – even when that someone is lovely.

I had a feeling she just wanted me to talk to her. I rolled on my back and looked at the ceiling. “If you lay down beside me, I’ll explain.”

She crawled into the bed and I wanted to ask her to crawl forever. “Your formal, outside smile is far from sexually suggestive,” I started.

“I didn’t know there was such thing as formal smiles.” She sat up beside me and started to run her fingers through my hair.

“There are. And you have one. You have four different smiles that I’ve identified thus far, to be exact.” I yawned. It had been a very long day.

“And what are they?”

“You’re such a woman. You love hearing about yourself,” I joked, and poked one of her breasts. Her nipple hardened again.

“Whatever. What women don’t like is being a foregone conclusion. In any case, I’m curious.” She put her cool palm on my forehead. “Tell me.”

“Number one: your formal smile – only shows a sliver of teeth, and your eyes remain serious. I’ve seen you give it to workmates, waiters, your boss.”

“That one’s easy. You have a similar one.”

“It’s beautiful. Your eyes squint, you show your molars. One of your oldest smiles, I think – the one I imagine you used even as a kid when you didn’t want your peers to know you were nervous.”

She massaged my temples. “Now we’re getting somewhere.”

“..and the third, where you look like the cat who ate the canary. Big eyes, deep dimples, and completely carnivorous.”

She slapped my belly and laughed, making her tits quiver. I sat up and straddled her so quickly the laugh hadn’t died on her lips when I kissed her. I knew she was eager because she bit my lower lip, tiny bites that stung and sometimes bled. I considered them a blessing. I kissed slow and deep even as she tried to tug and claw and caress more out of me, until she gave in and we’d gone past desire into that safe place lovers make for themselves to touch souls.

I held her face in my hands and kissed her pulsing temple. “Don’t you see why it’s mine?” I whispered.

And when I looked at her, there it was. And I couldn’t explain it to her.

Now I realized why I found it hard to believe those who said they’d seen heaven, then come back and described their version so well. Such precious things can’t possibly be described so easily. The words just don’t come.

“It’s mine because it’s only for me. Like you are. It’s precious because your being mine isn’t about possession, but about willing surrender…” my mouth snapped shut.  It was such a serious declaration for a Tuesday night.

“It’s a choice you make, for me, daily. To be mine. To give yourself to me and only me. And every day that you do is the best day of my life.”

She kissed a cross on my face – a kiss on my forehead, both cheeks, and my lips. I exhaled and went lax like I always did when her love softened my sharp edges. I closed my eyes.

She said my name.

“Hmm?” I opened an eye. The look on her face made sleep fly again.

“I think I know exactly the smile you’re talking about,” she said.